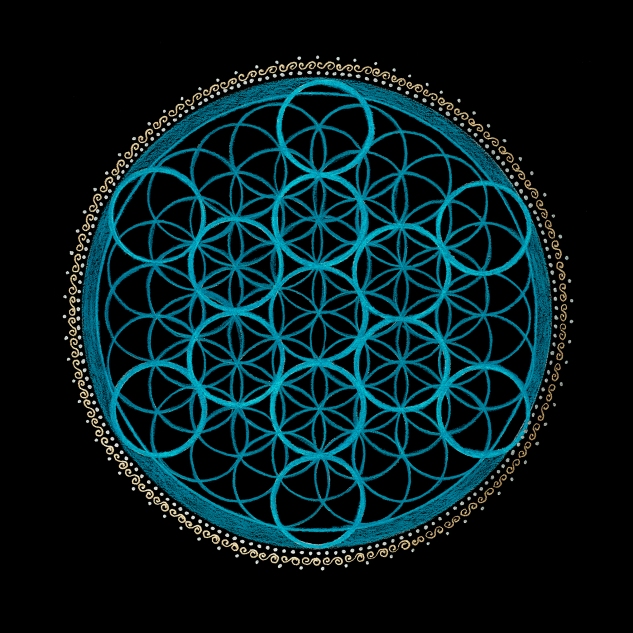 The throat chakra explains how the ancient story of time began. The Fruit of Life holds these secret wisdom teachings that brought order to uncertainty. These insights are revealed in the form of two rings of circles that are added to the Flower of Life.

The first secret is revealed when a ring of 18 circles, representing an 18-year Saros cycle that predicts lunar and solar eclipses, is added to the 19 circles of the Flower of Life. This forms a matrix of 37 total circles. The inner circle is the central “one”, surrounded by 36 circles, which equates 36 weeks or 9 months of gestation. When the “one” emerges from the watery lunar world of the womb into the solar world of air, the “breath of life” awakens its soul.

The third secret is found in the pattern formed by 13 independent circles within the Fruit of Life matrix. Each circle represents a 7-day week, together they form a period of 13-weeks, which represents the four seasons of: spring, summer, fall and winter. These four seasons consist of 13 weeks each. Together they create a year made up of 52 weeks. The four seasons are marked by the spring and fall equinoxes and the winter and summer solstices.

This solar concept of time merged with the lunar concept of months to create a dependable lunisolar calendar that informed farmers when to plants their seeds, when to expect blossoms and when to harvest the fruits of their labor. As agricultural societies emerged, men associated themselves with the solar world of the sun as keepers of the “seed”, while women were associated with the lunar world of the moon as keepers of the “mystery”. Eventually this understanding of nature’s cycles became a tool that was used to control growth, but its knowledge was limited to a select few. The natural origin story of time, hid in plain sight for thousands of years, masked by secrets, myths and laws.

We are intertwined with the stories of the sun, moon and stars. It is only natural for us to flow with the rhythm of nature’s clock.

Message: It is time to get organized and prepared for change.  Become aware of our surroundings and identify what needs to shift in order to move forward. We are encouraged to share our insights and stories with others as we shift into this new reality.

One thought on “Fruit of Life”