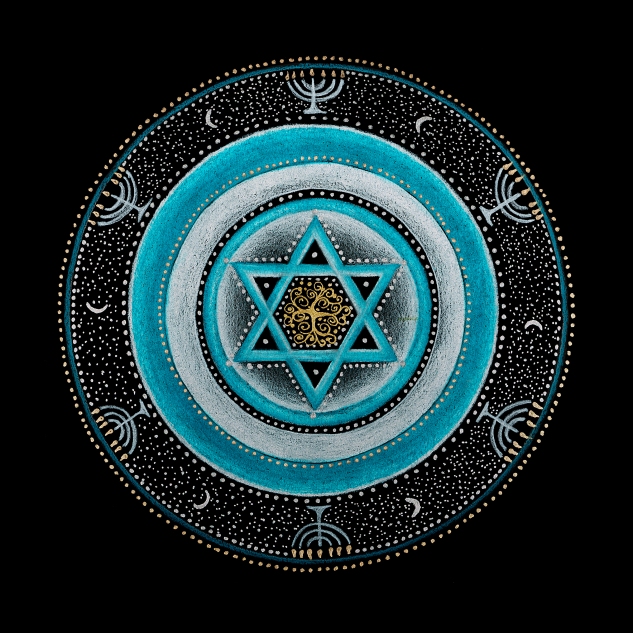 The throat chakra is associated with Judaism for it was a voice that spoke to Abraham in Sumeria asking him to renounce all other deities and believe in one God (monotheism). It was a voice that also spoke to Moses asking him to lead the Hebrews out of Egypt into the Promised Land. This voice also gave Moses the Ten Commandments and instructed him to build the Ark of the Covenant and a Menorah.

The “children of Abraham”, shared their stories in the oral tradition from one generation to another. Between 586BCE – 130ACE these oral stories were finally written onto paper. The first five books are known as the Torah, Genesis is the first book.

Throughout Genesis, it is the “voice of god” that created heaven and earth, and the “breath of life” that created Adam and Eve. This voice that cast Adam and Eve out of the Garden of Eden was originally known as El, Elohim, YHWH, Adonai, Elijah etc. The ancient Sumerian lord of wind named El may have inspired this story. Judaism contains the roots of belief in one God, from which Christianity and Islam grew. The Jewish people are seen as direct descendants of Isaac, son of Abraham and Sarah. Muslims are descendents of Ishmael, son of Abraham and Hagar.

Judaism’s roots are also connected to the mystical traditions of the Kabbalah, known as the Tree of Life. Studying the Kabbalah is a process of receiving and revealing wisdom from and for the self and soul to join in spiritual oneness. The roots of this story were forced underground. The throat chakra reminds us to consciously heal the stories we have received from our ancestors so we can reveal them to future generations.

Message: It is time to tell your story and speak your truth. Whatever has been preventing you from sharing the wisdom you hold is now releasing. Remember the person within you that desires to be heard. Speak up and make your dreams known. Your opinion matters; share it.

“Then the LORD God formed a man from the dust of the ground and breathed into his nostrils the breath of life, and the man became a living being.” – Genesis 2:7

The Star of David begins with the legend that this star was on King David’s shield. The top triangle strives upward, toward the sky, while the lower triangle strives downward, toward earth.  A ring of menorahs, seven-branched oil lamps are symbolic of the Tree of Life, surrounding the Star of David. The setting is at night in honor of the Jewish lunar calendar. The crescent moon signals the beginning of a new month. The Jewish day begins at Sunset.

If you liked what you read and want more... you may be interested in having the actual guidebook and card deck. The 134 page full-color book is sold separately from the cards. My goal is to find a publisher who can offer this a set. In the meantime, you can purchase either the book or cards via these links. Thank you for you support. Laural